ADIOS ILLINOIS – Who’s Staying, Who’s Leaving, and Where are They Going?

The population in Illinois is growing, but in the wrong direction. It is growing smaller! Late last year, the Census confirmed that the number of people living here declined for the fifth consecutive year, enough to drop the state from fifth-largest — a position it had held for decades — to sixth, behind Pennsylvania. 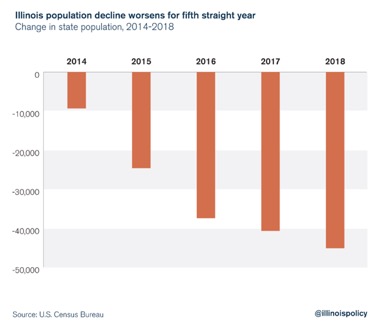 Over the past few decades, about 65,000 more people voluntarily left the state each year than arrived. This was neither shocking, nor worrisome. 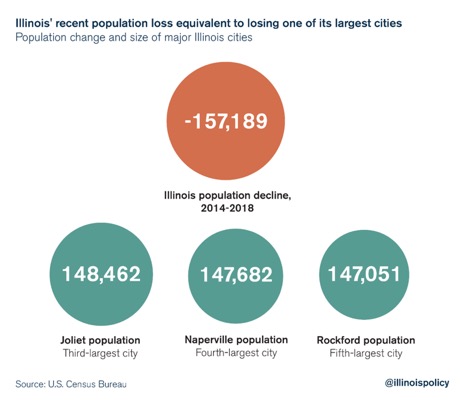 A shrinking population means less people are working and paying taxes to support the state and local governments. This makes financial management of an already difficult financial situation in Illinois that much more challenging. Every time a worker leaves the state, the tax burden on those who remain continues to grow. The fact is that as the nation’s population expands, the populations of Illinois and eight other states are declining. Once known as the land of revered opportunity, Illinois now seems like a land in decline.

No other state in the Midwest had population losses except Illinois. And it was second in losses only to New York, (which has a much greater population). 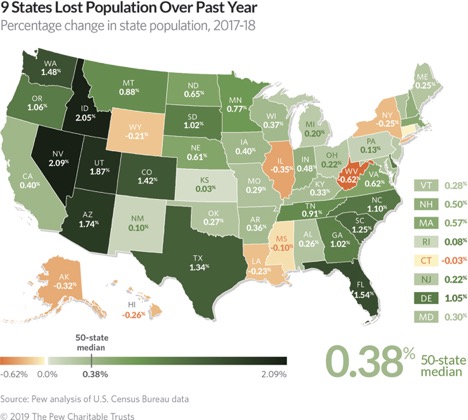 Many who are tired of dealing with the cold weather and shoveling their driveways leave for warmer climates. Many others leave because they feel that Illinois is headed in the wrong direction. Illinois politicians have raised taxes, milked employers and created enormous public indebtedness and the only solution in sight is, you guessed it, more taxation.

With Illinois’ weak growth, declining property values and political dysfunction, it’s not surprising people would look for better job opportunities and a more functional environment elsewhere. If job growth were healthier, fewer people would leave and more people would come. But it isn’t, and the result speaks for itself.

In fact, job opportunity is the prime driver of people leaving the state. Business opportunity and the labor market have been crushed by the state’s unfriendly tax policy. A study done by Joshua Gallin, a Federal Reserve economist, suggests that since 2006, people leaving for better job opportunities in other states explains 57% of Illinois population losses. 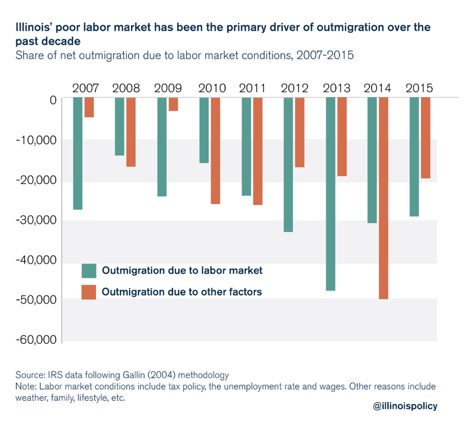 Note that population also shifts in relation to the number of births and deaths in a state. The trend recently in many states, including Illinois, is that the birth rate is less than the death rate. When deaths exceed births then population will decline. So, part of the problem in Illinois is not only that people are leaving, but the birth rate is lower and not as many people are attracted to come here to make up the difference.

Logic would say that high income earners are leaving because taxes are too high. The data show otherwise. In the chart below, New York City, Houston and Los Angeles, (none of which are favorable tax havens by any means) are top destinations. 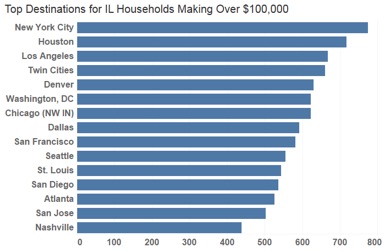 Obviously, when people move, taxes are just one piece of the puzzle. Quality of life, location of family, access to healthcare services and weather all play their parts. For most seniors, affordability is the most important factor when deciding where to live. What is the median home price? What is the total state and local tax burden? Does the state tax IRAs, pensions, etc.? What is the median income? What is the state’s overall cost of living? If you’re planning to work part-time, is the unemployment rate low? In Illinois, many retirees are running from the highest property taxes in the nation with the expectation that they will continue to increase at an even more rapid rate. We hear from many of our clients, “Enough is enough and we want out!” 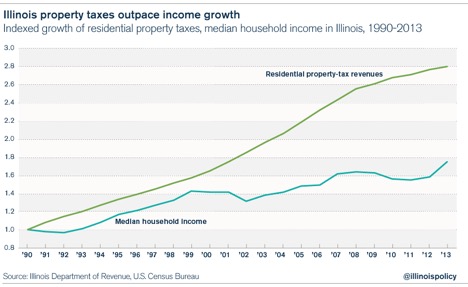 In Kiplinger’s recent report of the Worst States for Retirement 2018, Illinois is the eighth worst in the nation along with Kiplinger’s writeup, “The Prairie State’s fiscal standing has been sliding downward for years. Illinois has weighty long-term debts, large unfunded pension liabilities and big budget imbalances. All this puts Illinois in the second-lowest spot on the state rankings for fiscal soundness, trailing behind New Jersey, according to George Mason University’s Mercatus Center. In October 2015, ratings agency Fitch, downgraded the state’s credit rating to near-junk status. That means the tax breaks on a variety of retirement income sources, including 401(k) plans and individual retirement accounts, are hardly assured, and higher taxes are on the table. Already, state and local sales taxes are as high as 11% in some areas.”

So, where is everyone going?

The choice to move to a specific state or area of the country is complex. Some folks move to be closer to family or friends, or to have a closer driving distance to grandkids. On the other side of the coin, many people will not leave the state. They buckle down, pay the taxes and deal with the weather, because they don’t want to leave family and friends behind that they’ve had for years.

Climate and health pay a big part too. Those who are tired of the cold consider the South or Southwest. Those who don’t like long hot summers usually end up in the Northeast or Upper Midwest. And those who are bothered by arthritis might end up in Arizona or New Mexico in the dry Southwest.

Coastal areas in states such as Florida, Alabama, Georgia, Mississippi and Louisiana can experience frequent tropical storms and hurricanes. If you’re not prepared to deal with potential evacuations, boarding up your home’s windows and other safety measures, this isn’t the place for you. Plus, insurance costs in hurricane zones can be astronomical.

If you’re a retiree leaving the state, a prime aspect of your choice for a new home may be the activities it offers: golf, hiking and mountain biking. Or perhaps, somewhere you could do volunteer work or continue to study something that is interesting to you . Many choose to be near a college or university where there may be more cultural activities and sporting events. And finally, healthcare may be a core consideration, especially if you’re a person who has a specific medical need or high probability for urgent care.

Here are the top ten retirement destinations as reported by Realtor.com.

If Illinois is to reverse recent trends and foster population growth within the state, it must address the root causes of its migration problem: an unfriendly business environment that discourages investment and job creation and punishes residents with high taxes. Pension obligations are one of the largest cost drivers of government spending and now eat up more than a quarter of the state budget. This means, Illinoisans are paying more and getting less.

It’s unfortunate, but Illinois has had a terrible track record with budgets in recent years. The state spent two years without a budget at all, and only passed a budget for fiscal year 2018 after subjecting Illinoisans to a 32 percent income tax hike. The tax increases will only exacerbate Illinois’ migration crisis – pressuring residents, as we have seen, to flee the state and punishing those who choose to stay. For Illinois to reverse the migration trend, it will need to find a way to balance its budget by harnessing expenditures rather than adding more taxes, which would compound the existing migration problem.